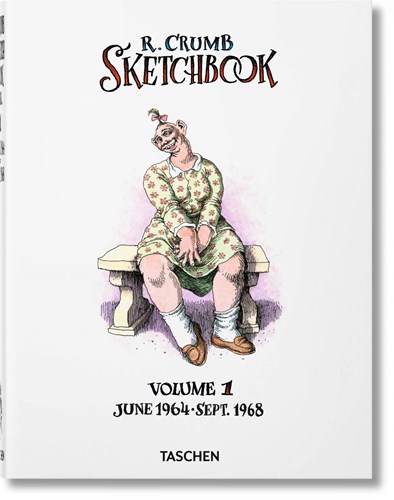 Volume 1 combines the two earliest volumes from the limited editions, produced directly from the original artworks now belonging to an ardent French collector, into one fat 440-page Crumb feast. This book contains hundreds of sketches, including early color drawings from the master of underground comic art, cover roughs for the legendary Zap and Head comics, the original Keep On Truckin’ sketches, the first appearance of Mr. Natural, plus his evolution and refinement, Fritz The Cat, the Old Pooperoo, and many, many voluptuous Crumb girls, all wrapped up in a quality hard cover featuring an illustration newly hand-colored by Crumb himself.

Volume 4 combines volumes 7 and 8 from the first boxed set (confusing, we know), it spans the years 1982 to 1989, a period when the artist was comfortably ensconced in rural California, raising his young daughter Sophie, who appears throughout this volume. But Crumb was still Crumb, declaring in one drawing, above a lovingly rendered tree, “As I get older I get more twisted, convoluted, depraved, cynical, embittered, self-centered, jaded, debauched, ruthless, greedy, conceited, set-in-my-ways, long-winded, absent-minded, prejudiced, closed-minded, misanthropic, nervous…”

Volume 5 of the R. Crumb Sketchbooks covers two of the most noteworthy events of the artist’s life: the family’s move to southern France in 1991 and the release of Terry Zwigoff’s 1994 documentary CRUMB. Solidly in his midlife crises years, our curmudgeon finds a measure of peace and acceptance of the cruel whims of fate—until the final pages, when he pronounces himself “such a fucking QUEER.”